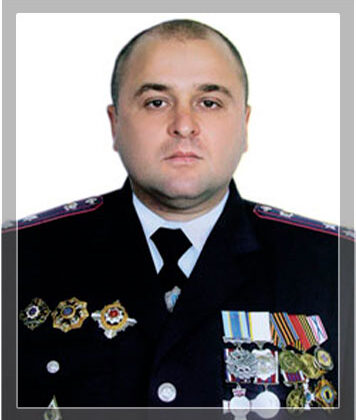 Alexander Vitalievich Radievskaya was born on May 9, 1970 in the city of Krivoy Rog, Dnepropetrovsk region. He lost his parents early and was raised by his grandparents. The future officer showed his leadership qualities already during his studies at the Krivoy Rog secondary school No. 104. 1991 graduated from the Vladikavkaz Higher Military Command School of the USSR Ministry of Internal Affairs. As a cadet, he had to participate in ending interethnic conflicts in the "hot spots" of the former USSR – Transcaucasia and Central Asia.

After graduation in 1998. . Of the 1st faculty (magistracy) of the Academy of the Border Troops of Ukraine, Oleksandr Vitalievich passed the way from the battalion commander to the unit commander in the Dnipropetrovsk special motorized police regiment of the Interior Ministry troops, since August 2011 he headed the Kryvyi Rih separate special motorized police brigade of the Central Territorial Command of the Internal Troops of the Ministry of Internal Affairs. In October 1999. . was awarded the medal "Defender of the Fatherland", in November 2004. . – the medal "For military service to Ukraine", in March 2009 – the order of Bogdan Khmelnytsky, III degree. . .

A man of duty and honor, a courageous and professional commander, always friendly and attentive to the interlocutor – this is how his colleagues remember Alexander Vitalievich. He was a demanding commander, but very attentive to the pressing problems of his subordinates, and with special care for conscripts. His favorite proverb was: "A soldier should not be pitied, but protected!". Conclusion of the last certification he passed: "the position held corresponds, it is advisable to refer to the reserve for promotion to the position of the first deputy head of the territorial command department – chief of staff". . .

Colonel Radievskaya had great authority among his subordinates – primarily because he went into battle ahead of them, in particular, he personally headed special operations to neutralize terrorist checkpoints on the outskirts of the settlements of Nikolaevka, Semenovka, Slavyansk. In the area of the anti-terrorist operation, he spent a total of two and a half months at the head of the unit (in the spring of 2014 transformed into a separate brigade for protecting public order of the Central Operational-Territorial Association of the National Guard of Ukraine).

After the rotation of personnel, he soon returned to the combat zone for the second time, where the eldest of his sons, the company commander of another military unit of NSU, Lieutenant Andrei Radievskaya, was also sent …

He died on July 23, 2014 during the battle for the liberation of Lysychansk, when he was ambushed on the bridge together with the soldiers. Colonel P. Snitsar and soldier I. Kotser died together with Oleksandr.
show all text