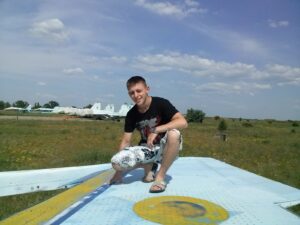 <– em>The son from childhood dreamed of becoming an officer. He wanted to continue the dynasty of the military in the third generation. After graduating from the Mirgorod comprehensive school No. 7, without hesitation, he entered the Lvov Academy of the Ground Forces named after the hetman Pyotr Sagaidachny,

During his studies, he rarely visited his home. And when he was already on his father’s doorstep, it was a real holiday for the family. Nikolai had time to visit his native school and teachers, and meet with friends. But more often he liked to communicate with the military personnel. I learned something new, and at the same time gained experience.

After graduating from the Academy in 2013, Nikolai was sent to military service in the 1st Separate Guards Tank Novgorod Order of the Red Banner, Kutuzov, Bogdan Khmelnitsky, Alexander Nevsky, Red Star Brigade.