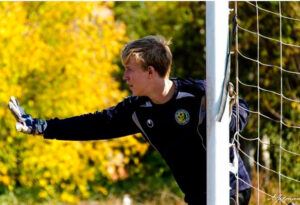 He studied at Kramatorsk Secondary School # 12, was fond of sports. At first he was engaged in the Greco-Roman wrestling, then became involved in football, defended the goal of the youth team "Avangard" from Kramatorsk, dreamed of becoming a professional goalkeeper. He was a fan of Shakhtar Donetsk, attended his matches in Donetsk, traveled with a team to other cities of Ukraine.

He organized a KVC team with friends, who went to perform in different cities of Ukraine. Stepan also took care of an orphanage in Kramatorsk with his friends. They often visited the kids, brought them toys, clothes, books, treats. He told his girlfriend Stepan that when they get married, they have one child and adopt two more.

In November 2017, three murderers of a 16-year-old Ukrainian patriot - Pogodin VV (“Kerch”), Moskalyov Yu. A., Suhomlinova MV, - Dzerzhinsky court sentenced in absentia to life imprisonment. «In the framework of the criminal proceedings under item 3, 12 h. 2 Art. 115 (the premeditated murder of a kidnapped person by a group of persons) was carried out by the Criminal Code of Ukraine and comprehensive evidence of the guilt of the militants in the brazen and brutal murder of the young man was collected, ”- the prosecutor of Donetsk region Yevhen Bondarenko. Two murderers are hiding in Russia, Pogodin is in occupied Crimea.
show all text